HERE ARE THE NOTES IN PDF;

iii) State the importance of genetics

iii) Name the types of variation

iii) What is monohybrid inheritance?

In a certain plant species, some individual plants may have only white, red or pink flowers. In an experiment a plant with white flowers was crossed with a parent with red flowers. Show results of F1 generation. Use letter R for red gene and W for white gene.

If the plants form F1 were selfed, work out the phenotype ratio for the F2 generation

iii) What are multiple alleles?

iii) What is meant by the term sex linkage?

What are the parental genotypes?

Work out the genotypes of the offspring

iii) State the factors that may cause mutation

– Change in nature, structure or number of chromosomes

vii) What are gene mutations?

Understanding human evolution and origin of other species.

iii) What is special creation?

– Organisms with certain characteristics are favoured by the environment

Such organisms tend to survive and produce viable offspring

Others not favored are eliminated from subsequent generations

iii) State the advantages of natural selection to organisms

– Mutation bring about variation which can be inherited

– Some of these variations are advantageous to the organism

vii) How would you prove that evolution is still taking place?

– This is an example of natural selection

– The peppered moth exists in two distinct forms, the speckled white form (normal form) and a melanic form (the black/dark)

– Due to industrial pollution tree barks have blackened with soot

– The speckled white form is abundant in areas without soot/smoke

– Responsiveness to change in environment

iii) State the importance of tactic response to:

Euglena when they swim towards the source of light

iii) State the ways in which tropisms are important to plants

Q- Source of auxin has been removed

iii) List the components of the mammalian sensory system

– provides a fast means of communication between receptors and effectors

– coordinates the activities of the body

– Somatic is concerned with controlling the conscious or voluntary actions of the body i.e. skin, bones, joints and skeletal muscles

iii) Explain how an impulse is transmitted across the synapse (gap)

iii) Compare a simple reflex action with a conditioned reflex

iii) Name the main endocrine glands, their secretions and functions in the human body

– Ear for hearing and balance

iii) What is accommodation of the eye?

– Size of pupil becomes large to allow in more light.

I i) What are the functions of the human ear?

iii) State the importance of support systems in living organisms

– This is the function of turgidity and presence of collencyma

iii) State the difference between exoskeleton and endoskeleton

iii) State the functions of the vertebral column

vii) Describe the bones that form the appendicular skeleton 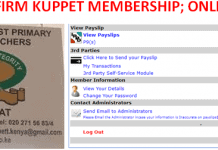 How to know if you are a Kuppet member

Syllabus For All Secondary Schools Per Subjects (Latest Syllabus)