President Uhuru Kenyatta has commended the Loreto Sisters for a century of selfless service to humanity and outstanding contribution to Kenya’s growth.

The President noted that through its Christian ministry and investments in education, social ministry and other acts of mercy, Loreto Sisters have transformed the lives of many people and made Kenya a better country.

“The contribution of Loreto Sisters in our nation is inked in their alumni, which include a President, bishops, scientists, leaders in government, academia, legal minds, captains of industry, entrepreneurs, sportsmen and women,” the President said.

“Loreto’s training has contributed immeasurably to the creative and performance arts, to politics, governance, religion and theology, environmental protection, community service, among many fields,” he added.

The Head of State spoke Saturday at the Loreto Mary Ward Centre in Karen, Nairobi County when he joined Catholic Church faithful during a special mass held to commemorate 100 years of Loreto Eastern Africa Province.

The six founders of Loreto Sisters arrived in Kenya from Ireland in 1921 and established the Loreto Eastern Africa Province which has been able to initiate 24 educational institutions in three African countries, 21 in Kenya, two in Tanzania and one in Ghana.

As part of the centenary celebrations, the President announced Government’s approval and support for the construction of a new Loreto School in Kilifi to accommodate 500 girls.

President Kenyatta, an alumnus of Loreto Convent, Valley Road recalled his two years as a pupil of the then mixed primary school, saying the institution shaped him to be a person who values hard work and respect for others.

“As a child, having spent two years in Loreto, I was eager to learn. My childhood foundation gave me the spirit of hard work, honesty, duty to my country, respect for others and, most of all, the fear of God,” the President said.

The President rallied the alumnus of Loreto schools to establish an endowment fund and scholarship programme, and offered his personal donation of Kshs 10 million for the initiative. He said the endowment fund will assist less privileged children to access education at Loreto institutions.

Further, the Head of State challenged fellow alumnus to partner with Loreto Sisters in preserving the century old history of the institution and directed the Ministry of Lands to grant a title deed to Loreto Msongari.

“My humble request to the Loreto Sisters is to preserve the history, icons, and artefacts of Loreto at Loreto Msongari. This way we will afford to give future generations the full breadth and perspective of the great story that is Loreto.

“To ensure that we do not have any interference or threat of disposal or alteration of this success, I hereby direct the Ministry of Lands & Physical Planning jointly with the Ministry of Sports, Culture & Heritage to ensure Msongari remains in the hands of the Loreto Sisters as a matter of public and historical interest,” the President directed.

Archbishop Philip Anyolo who conducted the homily called on Kenyans to emulate Loreto Sisters by giving genuine and good service to others so as to improve the society. 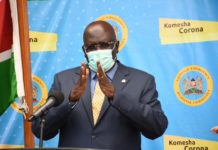 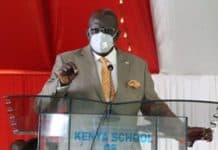 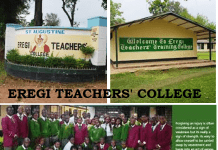 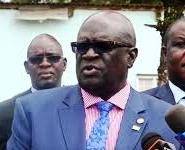