The annual East Africa games will now be held in Kakamega County, Western Region, in December 2021. 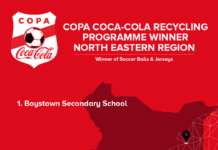